The main concepts in The Ponzi Factor are not opinions or perspectives but provable facts. The book was written to be readable, but an unfortunate result is that some of the critical ideas with the most profound implications can also be missed. This page highlights some of the key concepts that were introduced in the book, as well as some new concepts from ongoing research.

Logic: In this context can be interpreted as an analysis technique that draws connections between self-evident facts.

Textbook finance ideas such as, “the price of a stock is a reflection of future earnings” are invalid pseudoscience ideas no one can show is right or wrong.

The idea that non-dividend stocks for Berkshire Hathaway (BRK), meet the definition of a Ponzi scheme is falsifiable. Critics who disagree can show the idea is wrong by explaining how shareholders can get their money back without taking money from other investors and without using hypothetical assumptions such as, “Berkshire Hathaway could pay dividends in the future.”

The proof for why capital gains is zero-sum comes from the observable fact that in practice, the only practical way investors can make money is by selling their stocks to other investors. Counterarguments like how “A non-dividend company could pay dividends” are hypothetical and unprovable. It is illogical to debate an observable fact with hypothetical assumptions.

The distinction between hypothetical assumptions and observable facts (unfalsifiable and falsifiable) is the most important analytical technique that was introduced in the book.

Axiom 3 | Stocks Are Not Finite or Tangible

Law: A law is an idea that is validated from observation. Laws do not require explanations for why a phenomenon behaves a certain way but shows that the behavior is predictable based on what we can consistently observe.

Law of Limited Liquidity: In practice, only a small fraction of the total shares outstanding is liquid.

Real returns must be narrowly defined as real money that has been returned to investors. It cannot be an idea of money that can be realized under certain conditions [Axiom 1, Axiom 2, LLL].

There is no such thing as unrealized returns. When investors buy stocks, their money is gone [Axiom 1]. When the price goes up, investors are not technically receiving anything in return—and certainly not what they want in return [Axiom 2].

There is no such thing as realized capital gains for investors when we look at investors as a whole. When earlier investors realize a return, the latter investors also realize a loss [Axiom 2]. As a whole, investors cannot realize profits from caplital gains.

Fallacy: The Historical Return to Equities is Positive

The returns to equities are completely unknown. There is no database that tracks investor losses, and this is a highly debatable subject that is embedded in equity risk premium research.

The idea that equities have returned 7-10% annually over the past century is a myth that comes from misquoting the returns to the S&P 500. However, the performance of the S&P ignores over twenty thousand delisted companies from the overall market and thousands of companies that have been delisted from the S&P index itself. Contrary to what many assume, the performance of the S&P 500 is not made up of 500 stocks. It is made up of thousands of constituents, and the performance is based on the best 500 stocks (deemed by the S&P) on any given day. If a company on the S&P goes out of business today, it will simply be replaced with a new one tomorrow. Between 1968 and 2018, the S&P 500 circulated about 1600 companies. The long-run performance of 1100 companies are completely unaccounted for.

The survivorship bias with the S&P 500 is a data issue, but a more severe issue is how the returns are calculated with the total returns formula that ignores the Law of Limited Liquidity.

Fallacy: Stocks are Backed by the Company

Companies do not back the value of their stocks. If they did, the shareholders would know exactly how much their stocks are backed by and when they will receive that money. In practice, we can clearly observe that if an investor buys a share of GOOG for $1100 and the price drops to $900, Google will not make up that $200 difference. The idea of stocks being backed by the underlying company is based on a hypothetical scenario of when shareholders might receive something if the company liquidates. It is hypothetical because no one knows if anything will be left over after liquidation, and no one knows if or when a company like Google will liquidate.

There are two things wrong with the idea that companies don’t pay dividends because they reinvest it in the business. First, the idea is irrelevant. A stock without dividends is a Ponzi asset. It doesn’t matter why a company doesn’t pay the shareholders. The problem is they are not paying them. If investors don’t receive any money from the companies they own, they are forced get it from other investors—Ponzi.

The second issue is that the idea is unprovable. You say, “Google is reinvesting dividends,” and I say, “They’re just greedy.” You don’t have to agree, but you can’t prove me wrong. And I can’t prove you wrong either. The “reinvesting dividends” idea is not factual. It’s an unprovable assumption and permanent excuse companies use to avoid paying shareholders indefinitely. Lastly, it’s important to keep in mind that that there are many innovative companies that pay shareholders and reinvest in the business (Apple, IBM, MCD, BMY, etc.).

Unlike dividends, stock buybacks cannot be considered returns to investors because they can be rescinded with dilution. Many public companies print additional shares before or after the buyback [Axiom 3]. Some buybacks are also specifically designed to buy the shares from the directors and CEOs. The only way buybacks can be treated as returns is if the company definitively states it will never issue more share after the buyback, otherwise they can rescind what they returned.

First, stocks like Google’s class C shares (GOOG) do not have any voting rights. Second, voting only works when there is a finite number of votes. It is meaningless for stocks because companies can split shares, print additional shares, and do a lot of things to alter the number of votes and the voting structure. Stocks are not finite instruments (Tesla’s shares outstanding have almost doubled since 2010). They can be printed by almost anyone, which is also why they cannot be considered real property with intrinsic value. And lastly, there is nothing in history that shows voting as the essential element that made stocks equity. There is plenty of evidence that shows why dividends were essential to ownership, but not voting.

Analysis | Indirect Factors: Speculative determinants of profit. Factors based on opinions and events that may or may not occur. Indirect factors are typically unprovable. In the best-case scenario, these are factors that can show associations.

Dilution: An increase in shares outstanding that comes from the issuenace of new shares (not stock splits).

False Buyback: A scenario where the shares outstanding for a company does not decrease around the years it announced or engaged in stock buybacks.

False Dividends: Dividends that are paid during periods when there was evidence of dilution.

Idea Of Investing: The assumption that it is possible to make money with money and in the absence of labor—and this experience is dependent on intelligence and skills, rather than luck; something that is fundamentally different from gambling.

In a scenario where the exchange, transaction, or wager does not involve any tangible assets, and the payoff is one-to-one.

Investing: A scenario where the probability of success is quantitatively defined and greater than 50%.

Investing: In an exchange that does not involve tangible goods; a scenario where the probability of success can be defined and the expected (monetary) value of the wager is positive. 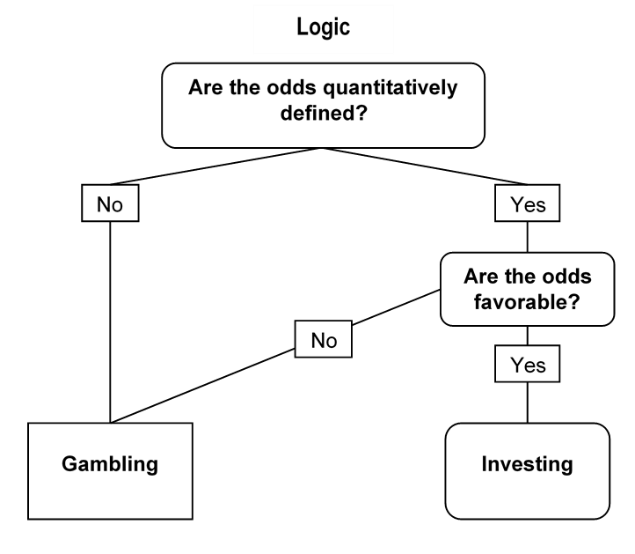 Ponzi Asset: Something with a monetary value that is not legitimately backed by anyone or anything. Ponzi assets do not possess any tangible or intrinsic value and have no definitive monetary connections to any entity.

Stocks without dividends are Ponzi Assets because investment profits are dependent on money from other investors. A system that shuffles money between investors is also known as a Ponzi scheme.

Ponzi Factor: The process wherein current the investor’s profits are dependent on cash from a new investor.

Scenario | Google Scenario: A scenario when shareholders make nothing while the underlying company reports extraordinary profits.

Sum | Negative-Sum: The net sum of all the wins and losses are negative.

Sum | Positive-Sum: The net sum of all the wins and losses are positive.

Sum | Zero-Sum: The net sum of all the wins and losses are equal to zero.

Transaction | Complete Transaction: A transaction when all parties involved in the exchange are content with holding, consuming, or using the final product. A complete transaction involves at least one end-user.

Money/cash is the medium of exchange for any and all goods and services. Therefore money/cash is a final product all parties are content with holding.

Only completed transactions can be analyzed to determine whether an investing/gambling scenario is positive, zero, or negative-sum.

Transaction | Incomplete Transaction: A transaction when some parties involved in the exchange are not content with holding, consuming, or using the product that resulted from the transaction. Incomplete transactions do not involve end-users.

Universal Error: The error of treating the assumed monetary value of an asset as a cash equivalent.

The word “value” does not have a uniform or universal definition. The legitimacy of a value can range from exchange values to real values and other forms of value in between.

Exchange Value: A value that can only be realized through a monetary exchange in a scenario where no defined entity has to take part in the exchange. Non-dividend stocks only possess exchange values.

Legitimate Value: A value that can only be realized through a monetary exchange where there is a defined entity that has to take part in the exchange. Bonds have legitimate value. They do not have physical or intrinsic value, but the company that issued the bond is responsible for paying the bondholder.

Real Value: A value that can be realized with or without money. A house is an example of something that has real value. It has a tangible value and a monetary value.

1 Delisted stock data was provided by Global Financial Data; accessed March 3, 2018. The twenty thousand delisted companies were over the period between 1940 – 2010.

2The term “survivorship bias” was also used in a paper by Dimson and Elroy in reference to how the U.S. markets survived world wars. That is different survivorship bias than the one referenced here for S&P 500.